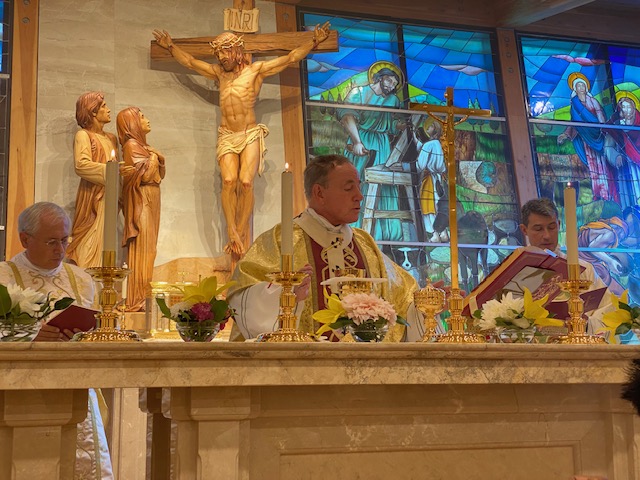 On a warm and sunny September 10th, the day finally arrived for Archbishop J. Michael Miller to visit Copper Ridge Conference Centre for the first time. In a solemn celebration of the Mass, Archbishop Miller consecrated the marble altar and dedicated the oratory to God for all time.

Welcomed by Msgr. Antoine de Rochebrune, Regional Vicar of Opus Dei for Canada, the archbishop then greeted those present: concelebrants Msgr. Antoine and Fr. Julio Lagos as well as Fr. Anthony Griffin and Frs. Pablo Santa Maria and Alessandro Lovato who assisted with the ceremonies. He had warm words of affection for Fr. Joseph Soria, present at the ceremony in his wheel chair.  He also greeted the small congregation of lay faithful and mentioned Fr. Paul Cormier who was not present but ministers frequently at the Conference Centre.

In his homily, the archbishop spoke warmly of “this splendid Chapel {that} tells all those who come to the Centre, for whatever reason, that it is Christ Jesus, who is the foundation (1 Cor 3:11) and cornerstone of all the activity that takes place here (cf. 1 Pt 2:7).

He explained that “a Chapel vividly calls to mind that God is “Other,” the Creator of all things. This is a sacred space, withdrawn from the other work and recreational spaces and is dedicated to God alone”.

As the sun streamed through the stained-glass windows, and rested on the life-sized carving of the crucified Christ looking down at his Blessed Mother and St. John at her side, the archbishop continued:

…it is a beautiful Chapel; and this is important. As Benedict XVI said in his homily at the Dedication of Gaudi’s masterpiece, Sagrada Familia, in Barcelona: “beauty is one of mankind’s greatest needs; it is the root from which the branches of our peace and the fruits of our hope come forth. Beauty also reveals God because, like him, a work of beauty is pure gratuity; it calls us to freedom and draws us away from selfishness.”

Like this Chapel, “every place set aside for divine worship is a sign of that spiritual temple, which is the Church, made up of living stones: of the faithful united by the one faith, of their participation in the Sacraments and of the bond of charity.”

As the sacred rite of Consecration of the Altar took place, the cantor intoned the Litany of the Saints. Archbishop Miller prayed and incensed the altar on every side while the cantor sang the antiphon “Stetit Angelus.” Following this, the archbishop anointed the altar, rubbing it entirely with the Holy Chrism Oil.  Later Msgr. Antoine and Fr. Julio anointed the walls of the oratory with Chrism. As the consecration of the stone altar imprints an indelible mark that may not be removed, and the oratory is dedicated to God, we may from now on celebrate this anniversary each year on September 10.

Before the ceremony, Archbishop Miller was taken on a tour of the facility and met with the Administration. Finally, he enjoyed a luncheon with all those present in the dining room overlooking the waters of Howe Sound. 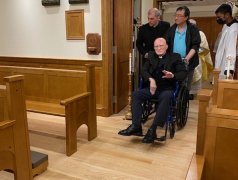 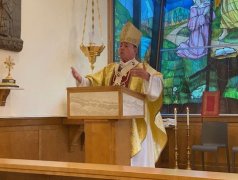 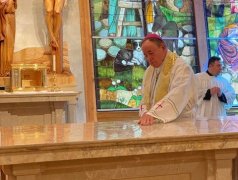 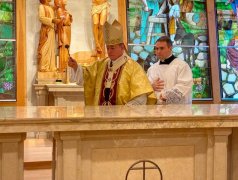 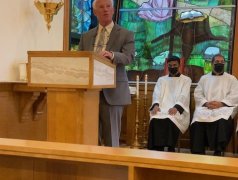 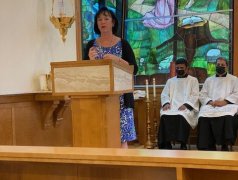 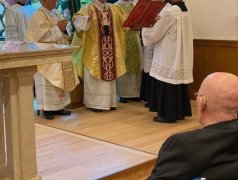 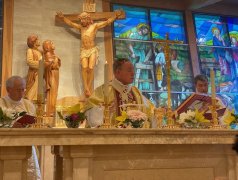