The much-anticipated visit of the Prelate of Opus Dei, Mons. Fernando Ocariz, took place on Sunday, August 11 when the otherwise glorious view of Howe Sound was somewhat obscured by a blanket of white clouds. But for the 20 or so people who accompanied him to the site, there was no less enthusiasm; in fact, the clouds seemed to enclose us in the quiet serenity of the presence of “the Father” as he is affectionately known. It could be described as an intimate gathering of close friends and collaborators in this great project – an instrument that will for generations to come, bring men and women of all ages closer to God.

Upon his arrival, the Father planted a dogwood tree next to the entrance of the building, and then toured inside even though the building is still under construction. In the future chapel, he was shown pictures of the wood sculpture that will be placed above the Blessed Sacrament altar and images of the stained-glass windows. Later he blessed the last stone of the project, which consists of two bas-reliefs of St. Josemaria and Blessed Alvaro that will be placed in the main oratory.

The Father recalled his trip to the property in September 2006, when he accompanied Bishop Javier Echevarria, the then-prelate, who blessed the site from the huge rock above the construction site. The Father was delighted with the progress of the construction, with the first activities scheduled to take place in early 2020.

John, an architect, asked the Father for advice on how to persevere in the apostolate of promoting Copper Ridge Conference Centre, so that the many retreats, workshops and seminars to be offered there may be filled. The Father said that it is not redundant to insist on prayer, asking the Lord to inspire ideas about how to promote CRCC.  He told us that we should consider when requesting help for the project, that we are not asking for a favour, but offering an opportunity to do something very good. He recounted how one of the faithful of Opus Dei once asked a friend to provide financial help to an apostolic endeavour: “Look, I’m doing you a favour.” The listener was surprised and replied, “I’ll give you money and then I have to thank you for it?” “Yes!” replied his friend. The Prelate spoke of the need to explain that the centre will produce much good for the city, the province and the entire country: supporting it is not helping the person asking, but doing good for society, which in turn benefits the person who is giving.

Kim, Barbara and Marie shared touching stories with the Father. Supported by a photo album, they told him the story of Copper Ridge, which, according to planning engineer Tito, began with a wild terrain and an unserviceable road. Help came from across Canada, including from children; one young girl baked cookies and sold them to her mother’s friends. The ever-present help of Saint Josemaria was obvious in chance meetings with people who were inspired by the project with no prior knowledge that anything such as this was taking place. Shortly before his death, a Jewish neighbor in the Copper Ridge area told his wife that one of the best things in his life had been to come to know Opus Dei.

In a brief testimony after the Father’s visit, Helena described how she and her husband and friends had first visited the site in May of 2014. They prayed the rosary as they hiked through the muddy dense forest, over a creek, finally arriving at the spot where Fr. Joseph Soria had placed a beautiful statue of Our Lady. They continued to do this each year and eventually when the road was completed and the construction of the building was taking place, they attended the annual outdoor mass. Helena described the building as huge and beautiful with views that glorify God in His creation. On Sunday, as she watched the Father blessing the portrait of Our Lady and the sculptures of St. Josemaria and Blessed Alvaro, she felt the tangible presence of St. Josemaria and Blessed Alvaro.

Caroline described the presence of the Father as exuding serenity and peace and listening to him she was inspired as he told us that we can be confident that God loves us so much; we should be full of joy – a joy that even challenges and suffering cannot mute. The Father showed a great love for the Holy Father, asking us to pray for him and to always be united to him.

The visit of the Prelate was a joy-filled occasion that has filled us with renewed enthusiasm and that will surely bring all the graces we need for this final push to see the completion of the Copper Ridge Conference Centre. 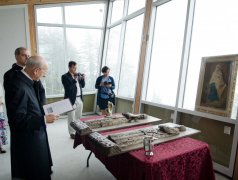 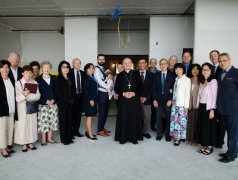 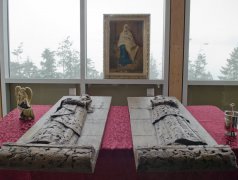 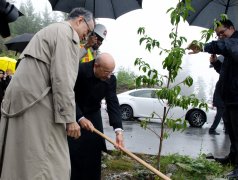 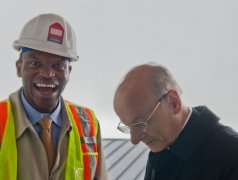 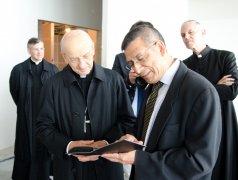 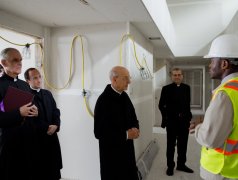