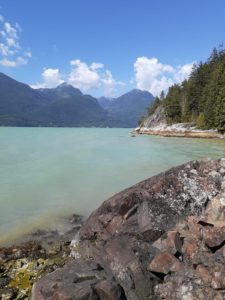 As part of John Yun?s trail building project at Copper Ridge Conference Centre, on a sunny, late August morning, Paul Adam, friend and fellow veteran of rock, snow and bush and I headed downhill from the parking lot midway between Britannia Beach and Browning Lake to check the possibilities on the narrow strip of Copper Ridge land sandwiched between Highway 99 and Howe Sound.  We knew before we set off that the terrain would be challenging, so it was no surprise to us that it was indeed pretty bushy and steep, even vertical. There are several unmarked and very sketchy trails. One of those trails led us to a precipice 35 metres above the beach. (It turns out that Squamish rock climbers on the hunt for a new cliff seized upon this one, naming it ?Seal Cove.?)

We followed another faint trail, an even steeper and rockier one, that did take us to the beach. There are a number of attractive viewpoints above or on the beach. The problem: these desirable spots are isolated from each other by cliffs and tangled bush.

During our three-hour foray we discovered a section of the original 1950?s highway.  We noted that someone had taken a liking to this portion of the long-abandoned and well-hidden road bed, as indicated by a neatly rolled up blue tarp and cords strung between the trees.

What to make of it all?  Yes, there are some truly lovely spots by the beach: but how do you access them?  They are separated from each other by steep and bushy terrain.  Sadly, Copper Ridge?s beachfront real estate remains for the foreseeable future out of reach and tantalizing.